Since I had good luck using it lately, I decided to ramp up one of my Land Raiders. I figured it should usually transport Khorne troops like Berserkers, Chosen and Possessed (and maybe Spawn too since I loved how they performed last game) so I went with a Khornate theme for her.

The dozer blades are from Kromlech. I love the look of them, reminds me of something out of Heavy Metal. I kept the spikes and skulls to a minimum, not wanting to go too over the top. The front Khorne symbol was cut off an old banner pole. I weathered and put a little battle damage on it as well.

I plan on trying the dried salt technique and some weathering powders to make her look beat up. 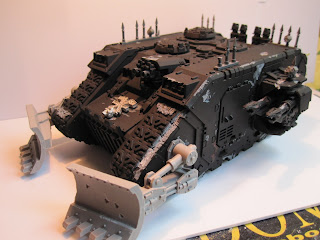 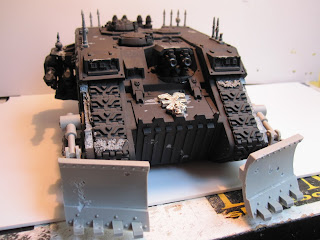 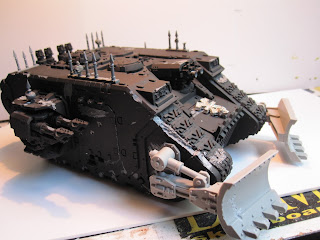 Posted by jugger at 1:15 PM No comments:

Played a small game yesterday introducing a friend and my brother to the game. 500 Points armies. It was our Daemons / Chaos Marines vs. Tau / Space Marines. I made a couple quick lists for our side. With so few points we didn't have much on the board, although I was able to get Typhus, a horde of zombies and a couple Nurgle Spawn in. My bro had a Daemon Prince and two units of Bloodletters.

On the Tau side he had two units of Fire Warriors, a Broadside and Riptide. Space Marines was 1 Tactical Squad, Scouts, and a squad of Termies.

Mission was The Relic.

We set up terrain and rolled up Warlord Traits. Nothing too crazy. Typhus trait sucks!

We had to set up first and got first turn, with everything jumping off and making for the Relic. Zombies are slooooow. Spawn are FAST! All the daemons deep struck except for the Prince. He flew over to the right flank to put a hurtin' on the Riptide. Bad idea.

Their turn they shoot the Prince out of the sky and end up doing 3 wounds to him. They got lucky grounding him with a wound and then poured shots into him once he hit the ground. He was left with one wound, and we had to get him out of there so as not to give up first blood AND Warlord points. The rest of the Marines and Tau moved up some, with the Riptide flying away in the assault phase and the Broadside continuing to cover the back edge of their board.

Second turn we fly the Prince back to hide behind a building. He isn't gonna contribute much now. Zombies and Spawn move up, with the Spawn setting up an easy charge on some Scouts. Typhus starts slinging some psychic love around, dropping the T and S of the Scouts by one. Of course I forget this in the assault phase and we don't wipe out the unit for first blood. Psychic cards have been ordered, no more of that! The Scouts fall back and the Spawn prepare to die by mass Tau firepower.

Their go and they deep strike the Termies right beside the cowering Prince. Goodbye Prince and hello first blood and Warlord :( That sucked. Spawn die and a few zombies get dropped. Those guys turned out to be tough, getting a nice 4+ cover save most of the game plus their usual Feel No Pain. Typhus in one of their blobs made for some nice protection for him too.

Our go Turn 3 and we continue to crawl up the board getting closer to the Relic. I'm losing more and more zombies now...damn Tau shooting. If I can just get enough to swarm the objective and then pull back into cover we should be able to pull out a win. Bloodletters land over on the left flank to hopefully so some damage and...

DIE MISERABLY in the next turn. Only got a 1 on the run roll for them so they couldn't get into any cover. I know it's Tau shooting and all but I think I have completely lost faith in deep striking Daemons, at least when you can't bring a big horde of them on. The other Bloodletter squad do the same thing wen they come on...land, get shot, die. The Termies charge Typhus' unit of Zombies and for the next two turns he has to challenge the two characters in there. It holds him up long enough to make the push for the Relic harder. He's a beast in combat at least. That is, until he makes a roll on the Boon table and turns into a Spawn. Oh Chaos, you fickle bitch you. Too funny!

Last few turns I watch my zombies get pummeled down to nothing. If I had taken them in a maxed out squad of 35 I think we would have had it, as it came down close to us holding the Relic in the final round (I had only taken them in two squads of 22). The Riptide moseys along and makes it into our backfield.

So they win with First Blood, Warlord and Linebreaker. We only managed to get one point by killing the Termie Lord. Nobody had the Relic as the last zombie holding it died. All in all, a very fun game. My friend who was playing for the first time loved it and wants to play again, so mission accomplished!

Posted by jugger at 7:20 PM No comments:

Finishing up some Oblits for my Death Guard. Still trying to make the flesh look all nasty, especially around the end of the arms where their weapons are constantly reforming. Pretty fun to paint! 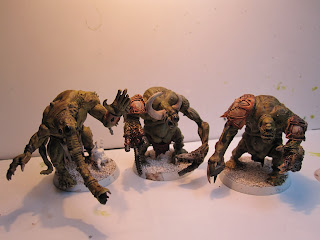 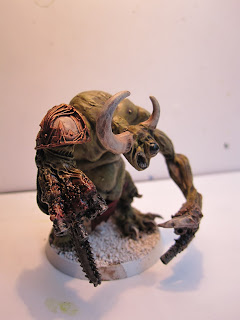 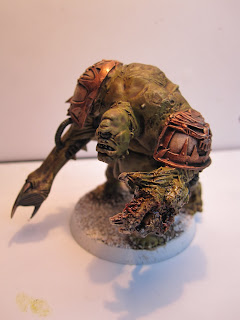 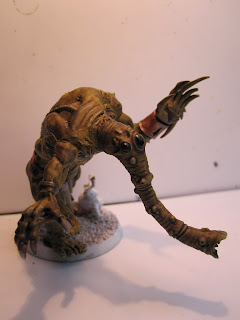 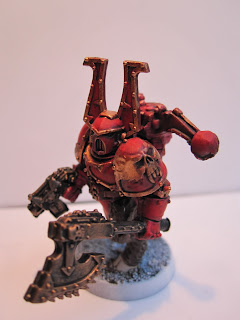 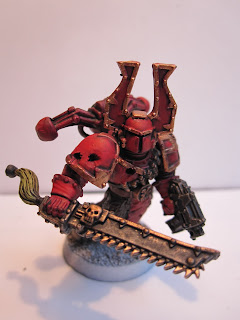 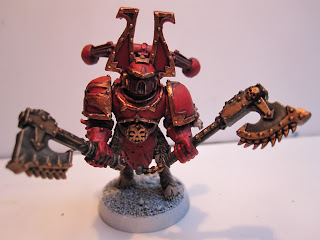 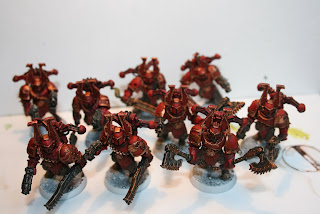 My Love for You is Like a Truck! Berserker!

Trying out some Berserker paint schemes today. I had put them on the shelf as unusable in this edition, that is, until I tried them with Land Raiders. They work great as long as they get to go where they want...most of the time. They did very well in a recent game so I'm wanting to get them done finally, had them for years.

They're made with the regular Berserker torsos and Beastmen legs. They also would work as great Possessed Marines if I ever want to give them a go. I'll post more as I get them done. I'm hoping to finish up a squad of ten before moving on to some more Nurgle stuff.

It was nice not painting something all rotted for a change too! 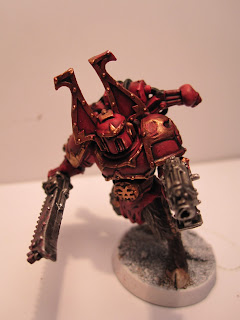 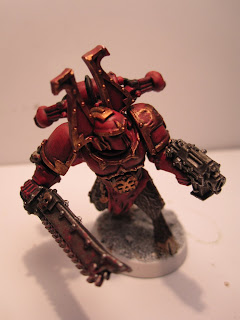