Time for something a little different than Daemons and Chaos Marines.

I put a hold on building any Imperial Guard allies for both those forces until the new book comes out; who knows how they'll change game wise and the codex is not that far off if you believe what you read online. Thought I'd piece together a squad leader for my future Traitor Guard force, the Neiglen 116th "Sewer Chewers". I love the idea of a Traitor Guard army worshipping daemons or summoning them forth as allies for battle. I imagine these guys can get pretty desperate and have no qualms about unleashing the full power of Nurgle on anyone who opposes them.

The body is from Forgeworld and the bare arm from the Catachan kit. Hard to see but he has a map case on him from a secondary company I picked up on Ebay. The robotic arm is from the current Cadian kit, lots of excellent conversion pieces on there.

I have some tanks, a ton of foot troopers and a good amount of heavy weapons ready to go for this force, just patiently waiting... 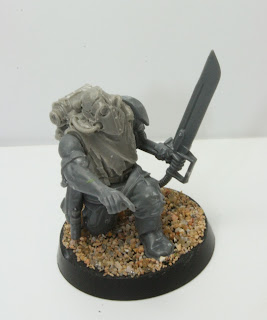 That turned out really well. The body and head really give it character.

Thanks! I'm looking forward to using more FW bits for these guys, their Traiitor Guard stuff is really good.